Effective urban educators are Reflective Practitioners who can accurately assess themselves and develop plans for improvement.

I’m lucky to have come across the concept of kaizen early on in my childhood. The word itself literally means “improvement” but in the English-speaking world this Japanese word has come to be associated with “continuous improvement,” especially as seen in the Japanese automotive industry. I practically devoured Joseph and Suzy Fucini’s 1990 book Working for the Japanese: Inside Mazda’s American Auto Plant even though my feet probably would not have reached the pedals had I gotten behind the wheel. It was the idea of making everything more efficient so you could do it in less time with fewer resources that appealed to me. Back then, I admired it as a way to get chores and such out of the way so I could have more time to play. Now, I realize that striving to always make things better is at the heart of being a reflective practitioner.

I use many reflective strategies to monitor and improve my teaching. In the classroom the most basic strategy is simply reading the room. Are students engaged? Who is struggling? Is anyone bored? This type of monitoring is constant and as automatic as breathing. Sometimes lessons work smoothly and need only minor tweaks. Sometimes issues can be solved on the fly. While I was teaching English in Japan I would use a notebook to track which homerooms had done which lessons and how each one had turned out. I would generally write just brief comments, but oftentimes I would figure out solutions to problems simply by writing down what had happened. For example, maybe a worksheet introduced new elements in a way that was unnatural to the scaffolding of the activity, and needed to be rearranged. I would never make the 400 copies I would eventually need of any material all at once to give myself the leeway to change things as needed.

In my elementary school student-teaching placement I did not have the chance to write reflections immediately after every session because the classes were back-to-back without a single minute in between. However, I was still making mental note of students’ reactions to gauge the effectiveness of the lesson and its execution. For example, the first time I taught the Action Drawing lesson happened to be with a homeroom that had many drawers in it, so even though they were only second graders, they took to the project like fish to water. The next second grade homeroom, however, was not understanding the concept of moving the small strips of paper around before gluing them down to decide on a pose; many students simply copied my “Walking the Dog” example. So I knew I needed a way to physically demonstrate moving the strips around in a way that everyone could see at once. 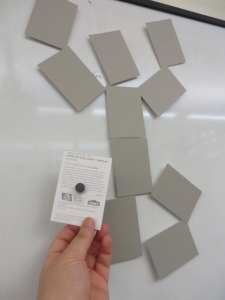 I came up with the idea of taping paint swatches to magnets so I could move them around on the whiteboard, demonstrating potential poses for the activities the children were listing with this 2D paper “mannequin.” The next homeroom to tackle the project did better than the previous two. Granted, they were third graders, so their relatively advanced development played a part in this improvement too, but considering how much the default artistic abilities of this group of students varied, I think the better demonstration tool was also a key factor.

Another reflective tool I have used occasionally is taking and watching video of myself teaching. I have done this both as a student-teacher and as a part-time Japanese instructor at Wayne State. Even though I’m fairly used to monitoring myself in the moment, I cannot possibly catch every detail of all that goes on in any given classroom. Sometimes these videos can help me see the good that is happening in the room that I might not notice if I have two or three students struggling and divert most of my attention to them. Continuous improvement is important and definitely makes me better, but it is also important to take stock of what is going well and not fix things that aren’t broken!

To that end, the blog I keep on this website is also great for taking accurate stock of what’s been going on in my lessons. Though I don’t have time to make blog posts for every lesson nor even every week that I teach, I’ve found that the blog can serve as a digital version of the notebook I kept for my classes in Japan. Sometimes writing about my lessons helps me see that things are going well. Other times, I notice that something didn’t work as well as I thought it had. Then, as happened often during my full-time student-teaching, sometimes I realize that I simply did not remember to take pictures! Whatever the case may be, writing expressly to present the lessons to others forces me to express myself in a way that another person can understand, which in turn gives me a new, clearer perspective.