I never imagined as a child that the tira de economia I was making would one day become a teaching material in a high school Fibers class.

It had been common in Honduran elementary schools to teach children sewing and basic embroidery. Apparently, the practice has fallen by the wayside, if the image to the right and comments on it are any indication. Although I never got to do it in school because my family immigrated to the US before I got to the grade this was done in, my mother did take it upon herself to teach me how to make a tira de economia.

The tira de economia consists of a strip of manta cloth with rows of the various basic stitches one can use in sewing and embroidery. For example, besides the basic running stitch, there’s the buttonhole stitch (AKA blanket stitch), zigzag stitch, and chain stitch. (Chains were my favorite!) Having made one of these strips, children would then have to use the various stitches to create an image in embroidery, much like that happy strawberry there.

Fast forward to the present day. The students in Fibers class were making “quilt squares” out of fabric they had dyed with shibori techniques. My mentor teacher suggested that I show the students how to do embroidery to embellish their projects. So, I would show them my tira de economia and briefly explain what it was, and that these were the stitches I could show them how to do. I also showed them the quilting project I had done years ago, so that they could see how stitching is used in conjunction with images on fabric. For the most part, students asked me to show them how to do the running stitch and chain stitch.

Click the thumbnails in the gallery below to see some of the pieces I helped students with! 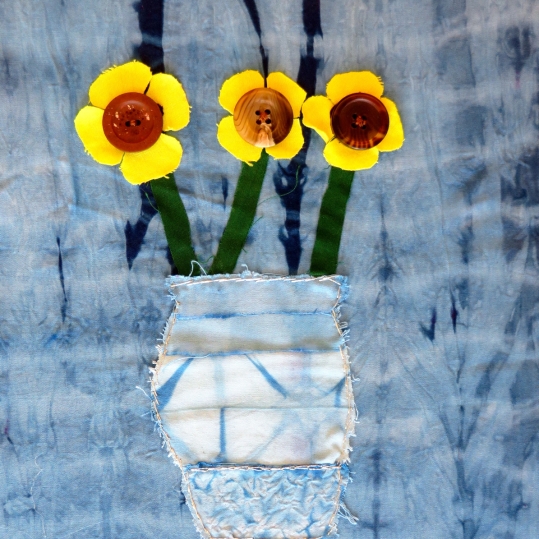 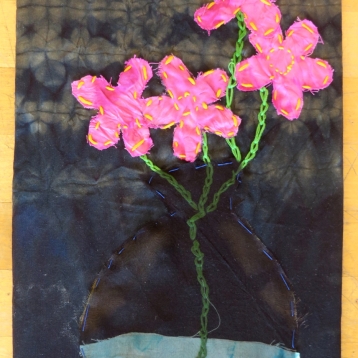 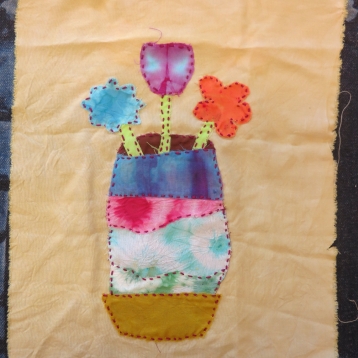 One thing that I particularly enjoyed about this project was the chance to teach students life skills they might not otherwise have picked up. To my surprise, only a few of the girls said they knew how to make basic repairs to clothes, such as mending and sewing on buttons. I saw students doing ineffective things, such as attempting to make a big knot by tying a series of single knots instead of just rolling the doubled-up thread between their fingers to make several knots simultaneously. Most students were taking the needle off their embroidery floss to tie the knot at the end to secure their work. This is much harder than using the needle itself to thread a knot. One student, somewhat to his credit, tried wrapping the thin thread around a pencil to make it easier to knot. I asked him if he was making his life difficult, showed him how to make a knot with the needle, and upon seeing how simple the solution was, he exclaimed, “JESUS CHRIST” in disbelief.

I couldn’t help but think about a video a friend had showed me about how “America should teach basic life skills like Japan does.” While my personal experience in Japan leads me to believe the video paints a very skewed picture of home ec education in Japan (it’s not nearly as gender equal as the video claims, for one), I must also admit that American students, forced to endure an environment that focuses so much on standardized testing, aren’t getting many classes that are hands-on anything. Also, perhaps in a drive to eliminate sexist practices in schools, instead of making shop and home ec classes that all students had to take regardless of gender, such classes were eliminated all together. Funding of course also comes into play. That said, some young people might complain in videos like the one made by ATTN (linked above) about not getting life skills in school, but even when students do get a chance to be in classes such as anything in the applied arts, they’re not necessarily jumping for joy at the chance to learn life skills; they might not realize that is in effect what they’re learning. They think they’re just making an image of flowers in a vase. It’s important for teachers to spell things out for students sometimes, because they might not see how something in the classroom connects to the “real world” outside of school.

A trilingual art educator with the best bad sense of humor. よろしく〜 View all posts by ellyvega

3 thoughts on “Of Embroidery & Life Skills”

This site uses Akismet to reduce spam. Learn how your comment data is processed.