The last lesson I designed at Lincoln Elementary was meant to engage the fourth and fifth graders on a personal level with pieces featuring their name or nickname as graffiti-style name “throwies.” When they came into the room, they noticed photos of real graffiti artworks from Detroit posted around the room and at their tables. We started off with a Visual Thinking Strategies session using these examples. I asked questions such as “What do you see?” and “What do you notice about the letters in these images?” Soon enough a student said the pictures were of graffiti, so we moved on to a brief discussion of the differences, visual and legal, of different types of graffiti.

I have done murals before but I have never done graffiti, so I thought it was important for students to hear from a real graffiti artist.

Everything begins with a sketch in your mind.
–Sintex

I had noticed that all too often students would work on something and become dissatisfied with it, wanting to start all over. But without being able to pinpoint why they didn’t like it, starting over—on top of being a waste of time and materials—hardly ever made them more satisfied with their artwork anyway. Noticing their creation process, I realized that they always tried to make the final product from the beginning on the first try. So one of my goals for this lesson was to impress upon students the importance of drawing to generate ideas, NOT to make a final product from the beginning. I showed students in-progress copies of my name design: thumbnail sketches, rough sketch, clean inked copy, and final color version, to show them that art doesn’t just magically happen on the first try.

Click the thumbnails above to see the images at full size.

On the first day, most students were able to sketch a few ideas (they had been told to do eight thumbnail sketches) in the remaining class time.

Some students really struggled with the concept of sketching, which threw me a little off guard. Two were so hesitant to try making any mark in their sketchbooks that they were visibly upset. They said they had no idea what to do. I said to just write their name and then change the shape of the letters to start with.

Me: Just ask yourself, “Does this look cool or stupid?” If it’s cool you keep it. If it’s not you erase it. You see how my sketchbook is so dirty? That’s because I erased a million times to come up with these ideas. When you die in a video game, do you stop playing?

Me: Well then. Don’t give up on this either!

The second day of this lesson began with me giving a demonstration of color blending with color pencils. Some students weren’t able to completely finish their designs with fully blended colors, but I didn’t think they would in just two sessions anyway, considering it had taken me about 5 hours to make my example between sketching, drawing, inking, and coloring. Still, many students were able to reach a decent level of finish on this project.

Students were given the rubric on Day 1 so that they would know exactly what the expectations were. Unfortunately, some did not get around to answering the reflective questions on the rubric. In the photo below, I used a completely blank rubric to grade this student as he had not had time to fill one out for himself.

The best designs were put outside on a “wall” (a free-standing bulletin board).

As someone who wasn’t terribly familiar with graffiti beyond just seeing it around town, I had to do a lot of research to put this lesson together. The examples of real graffiti that I printed out to show students were largely taken from posts about graffiti on the blog Bikes, Books, & A Little Music, such as this one. I got the “RapScript” font for the rubric on Graffiti Fonts. And of course, I looked at the home pages of graffiti artists like Sintex, Shades, and Malt. It was really interesting for me personally to delve into this genre as pretty much all of the graffiti I’d grown up seeing was gang related. Most of their tagging had no redeeming artistic quality but every now and then there would be one that did and I’d feel a bit conflicted about liking the lettering. But even the aesthetically better examples I had seen were nothing compared to the graffiti murals being done legally these days. I hope the genre can continue to flourish on welcoming walls!

My mentor teacher had a small fortune in paint swatches and I figured they would be a good way to teach students about one of the most basic color harmonies: complementary colors. The swatches also offered an opportunity to talk about other fields that connect to the arts, such as fashion, graphic, and interior design. In every 3rd grade homeroom I did this lesson with, there were several students who had seen these swatches at various home improvements stores, and one student in particular recounted how she and her sister have fun scanning all the swatches to see how much the paints cost.

The first time I did this lesson, I gave the students stencils with various themes: traffic signs, zoo animals, vegetables, weather, etc. Though I warned them that using the smaller designs on these stencils would be too time-consuming as they had to fill their 9 x 12 background with a full composition, many students were attracted to these detailed designs, which they also had trouble cutting out. Very few students took me up on my suggestion to make symmetrical shapes by folding the swatches, similar to what we had done for papel picado, or by simply free-hand drawing the desired shapes on the back of the swatch. Reflecting on this challenge, I prepared tracers of simpler shapes at a larger size for students to use—if they so desired. They were of course still free to generate shapes by any other method they desired and/or could come up with.

Besides the shaped format, this student’s work is interesting for the deliberate use of glue stains against the black paper. Perhaps both the first cut in the construction paper and the first stain were accidental, but this student discovered how to make them work with him rather than against him!

That said, the neatness of the piece (cutting and gluing) were part of the assessment for this project. I did a demonstration at the beginning of the second day of this lesson on how to glue neatly by leaving space between the edge of the shape being glued and the line of glue that gets put onto it. Just as important was the demonstration on how to clean up the glue without leaving stains when it does seep out anyway. Because even the best of us will get glue in the wrong place sometimes!

Below are some examples I made to show the students. I was also using the “Leprechaun” piece shown earlier in this post as an example for the homerooms that did this lesson after the first one, in which that piece was made. Students tend to be more invested in their own projects when they see examples done by their peers.

Lastly, here are PDFs of the proper lesson plan and the slideshow I used to introduce this lesson. Due to scheduling issues, the first time I taught this (and the session for which the plan was written), I only had one day to work with students on this, but the other homerooms got two days, which is far more appropriate for the amount of work required.

Once all homerooms had made their complementary color designs, we let the students take home the remaining paint swatches. There were about five boxes of them left, but the kids cleaned us out! You would have thought it was Halloween candy they were stuffing into their backpacks. Some students said they were drawing on them, others said they were going to make something out of them. One glued several around a plastic plate to make a huge flower. I forgot to take a picture of it with everything else that has to be done in an art studio so you’ll just have to take my word for it. ^o^ 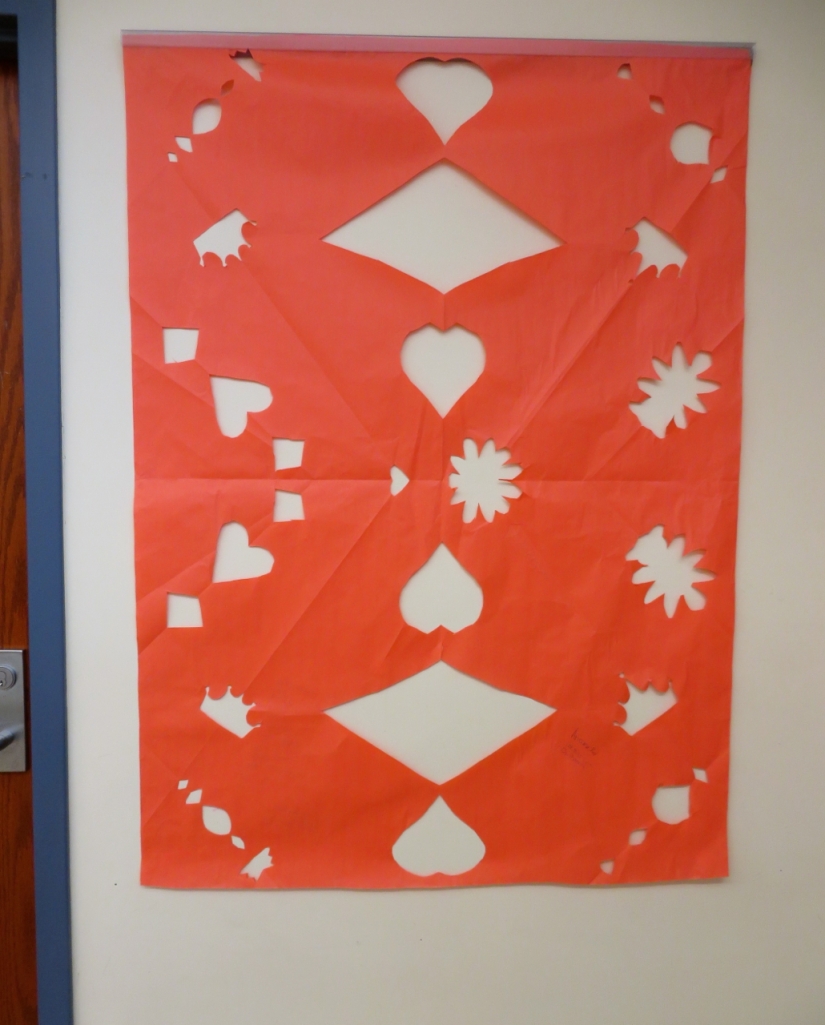 This fall, I’m at Lincoln Elementary School in Warren as a half-time student teaching intern. For the first lesson I designed and taught there, I shared the Mexican folk art of papel picado (lit., “cut paper”) with the students. A second grader had given my mentor teacher something that looked like an attempt to emulate the overall look of papel picado, and given the craft’s association with Dia de los Muertos (“Day of the Dead,” a celebration of ancestors around November 1st), I figured the timing was perfect.

After an introduction to the holiday and the craft, and a brief Math Class Moment as we talked about symmetry, students created their own papel picado designs. 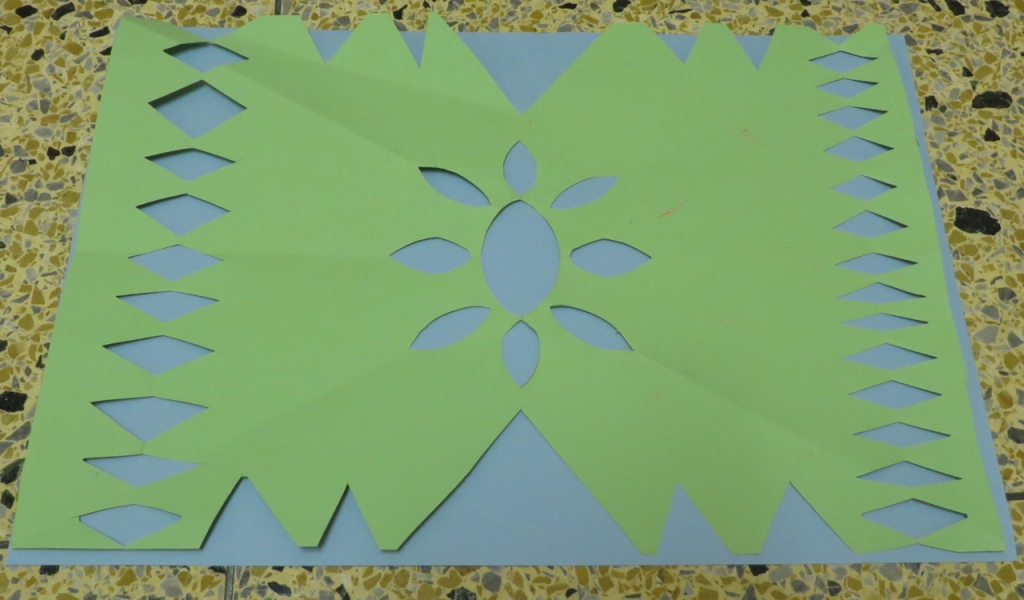 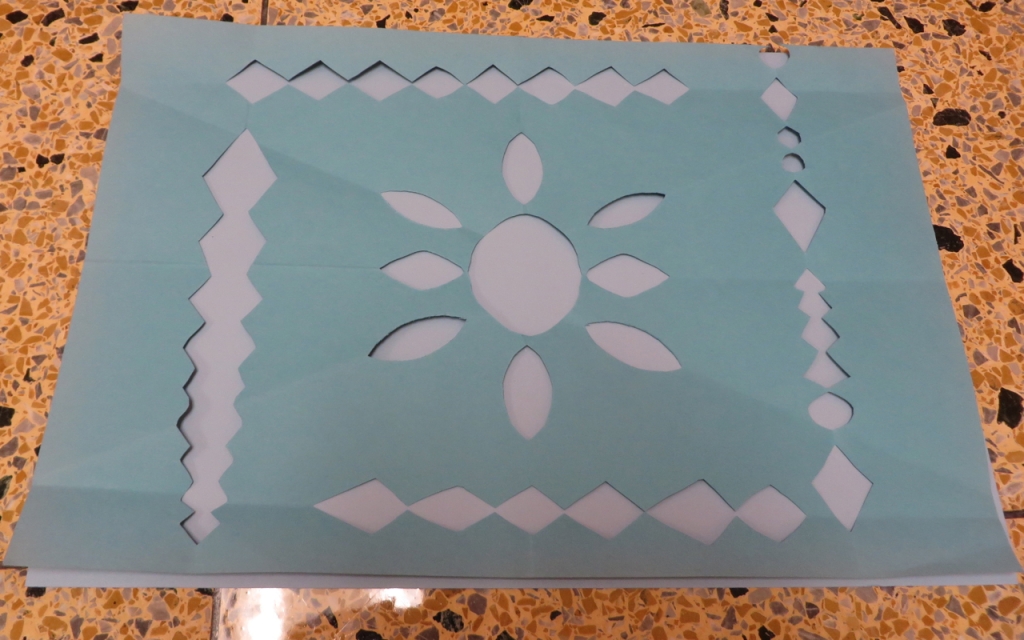 The first class that did this was a 4th/5th split. Their work was hung up in the hallway and served as excellent examples and motivators for the other classes.

When are we gonna make those?

Below are some examples I made for the lesson’s introduction. 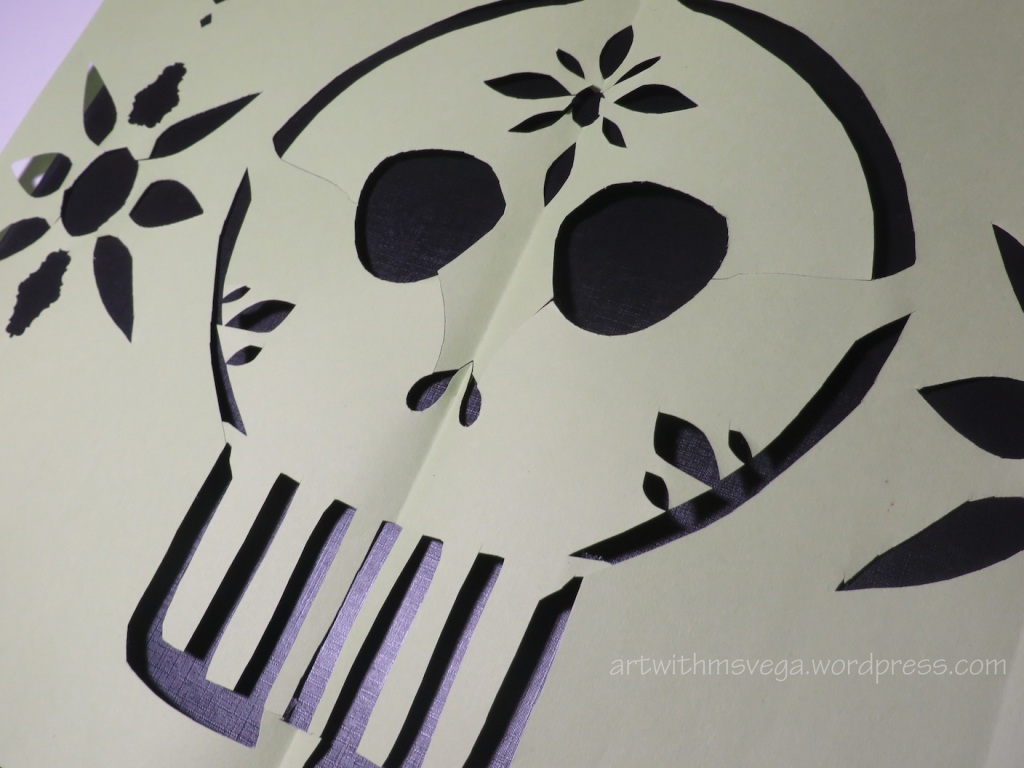 As Dia de los Muertos spreads out from the Mexican and Latin community, more and more people will see papel picado. This year, the Detroit Institute of Arts even has an exhibit for the holiday featuring ofrendas, altars honoring the deceased. While doing this lesson I was a bit surprised to learn that so many of the young students thought Halloween had something to do with the devil instead of being more closely related, originally at least, to holidays all over the world like the Mexican Day of the Dead, or Obon in Japan, which celebrate the lives of lost loved ones. I would like to do this project again with older students, and with more time, so that we can really dig into the meaning of these types of festivals.